South Korea’s population size is about 52 million, and nearly 10 million people (approximately 20% of the total population) live in the capital, Seoul. There are 11 cities in South Korea with more than 1 million people, and 6 of them are introduced in this article with their map positions and descriptions. 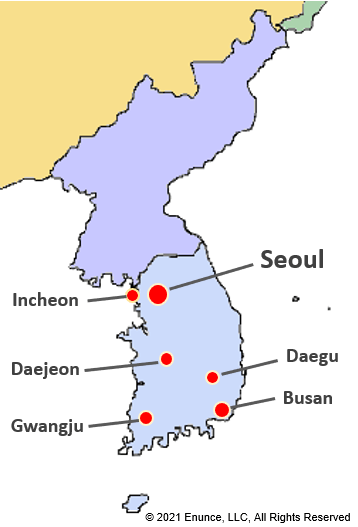 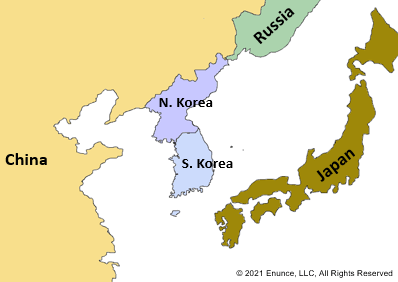 Seoul is the nation’s capital with 9.6 million residents. Most of the central government offices, nearly all of the headquarters of the country’s large corporations and 45 four-year universities are concentrated in the city of Seoul. It used to be the seat of the Joseon Dynasty, Korea’s last dynastic Kingdom, which lasted from 1392 to 1910. Joseon Kings’ old palaces are popular tourist attractions in Seoul today. Modern Seoul is bisected by the Han River, flowing through the city from east to west. The sections evolved from Joseon-era neighborhoods are located north of the river and form the old Seoul. Until the end of the 19th century, the central part of the old Seoul was surrounded by a wall, accessible through four major gates. Although the wall is long gone, three of the gates, with their imposing two-tiered roof towers, still stand. The area south of the Han River near Seoul was mostly farm lands and mud fields until the early 1970’s, when the area first began to be developed. Today, the “Gang-Nam” (literal meaning: “south of the river”) district is by far the most affluent neighborhood in South Korea, with fancy shops and expensive houses.

Busan is South Korea’s second largest city. The Busan Port, facing the Pacific Ocean, is the 6th largest port in the world and a key infrastructure supporting South Korea’s export-import activities. Busan’s importance as a logistics hub was recognized in the early 20th century, and South Korea’s railroads and highways were first developed largely along the Seoul-Busan axis, with branch routes being added later. Busan is close to two industrial zones in the southeastern corner of the country: Ulsan (with large shipbuilding yards and automobile plants) and Changwon (with electronics companies, automobile plants and defense industry complexes). Busan hosted the 2002 World Cup the 2005 APEC Summit.

Incheon is a port city facing the “Yellow Sea”, which is a large, bay-like inlet of the sea surrounded by the Korean peninsula and China. Since antiquity, Incheon was a port of choice for ships carrying Chinese diplomats and traders. In 1887, Incheon underwent a dramatic transition when it was “opened” as what would now be called an international free trade zone. Shortly following the “opening”, a China Town and a Japan Town appeared in the City. Similarly, Germans, Russians and Americans created their own “towns” in Incheon. These foreign “towns” no longer exist (except for a downsized Chinatown), but Incheon continues to play the role as an interface between Korea and the rest of the world. Incheon International Airport is the primary airport serving the city of Seoul as well as other parts of the country. In 2003, South Korean government designated three large sections of Incheon as “Incheon Free Economic Zone (IFEZ)” with the goal of making it an international center of business and finance.

Daegu, with a population size of 2.4 million, is largest city in the North Gyeongsang Province. In the second half of the Joseon dynasty era, Daegu was the provincial capital governing the entire Gyeongsang region (including today’s South Gyeongsang Province and Busan). One of Daegu’s tourist attractions is “Yak Ryung Street”, which is a 360-year-old, traditional market place with shops specializing in Korean herbal medicine.

In the early 20th century, Daejeon was abruptly transformed from an obscure farming village to a city when it was picked as the spot for a midpoint stop (station) along the line of the Seoul-Busan railroad. The railroad route heading for the city of Gwangju was later added using the Daejeon Station as the connecting point. Modern highways were developed in the same pattern, bolstering the importance of Daejeon as an inland transportation hub. Today’s Daejeon is Korea’s research and development mecca, with such research centers as Korea Atomic Energy Research Institute, Electronics and Telecommunications Research Institute and Korea Aerospace Research Institute.

With 1.4 million residents, Gwangju is the largest city in the Jeolla region. Gwangju is sometimes called “village of artists”, as it has produced many well-known painters, poets and writers both in the Joseon era and modern times. Today’s Gwangju is redefining itself as an emerging powerhouse of technology, research and education in the southwestern part of the nation.